Calling out cultural appropriation does not kill creative license, it simply forces those who control the narrative and means of distribution to cite their sources, argues Darío Calmese. 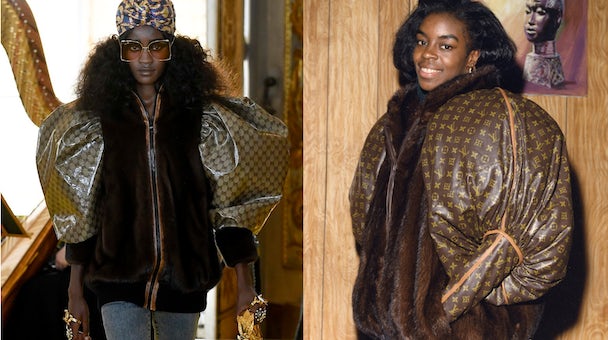 According to sources close to Dapper Dan, there was no conversation between him and Gucci prior to the collection; as the show unfolded, he discovered with the rest of the fashion world that his work had been referenced by the multi-billion dollar Italian house. Prior to the backlash, there was no mention of an “homage” to Dapper Dan to be found anywhere and a careful reading of the collection actually reveals that this was a far cry from canonising “Dap” into the “same echelon as master painters Botticelli and Titian” as the piece suggests; it was quite the contrary.

With looks emblazoned with slogans like Guccy, Guccify Yourself and Guccification, counterfeit goods was a through-line of this collection. In my view, Dapper Dan’s unsolicited inclusion in an otherwise Renaissance-inspired collection was at best a rip-off; at worst, a mockery.

The assertion that Dapper Dan owes his existence to Gucci is false. Dap’s ingenuity springs from the same well that many black creatives draw from: negotiating and demanding space in a system that wasn’t built with them in mind. The catalyst for Dapper Dan’s foray into silkscreening leather with the monograms of luxury brands was actually the refusal of those very brands to sell to him as he attempted to open a clothing store in Harlem. Stunted and frustrated, but always a hustler, he developed a technique that allowed his customers to look as luxurious as they wanted to feel.

“What bootlegging indicates is that a product does not fully serve the market”.

If one is keen, bootlegging can be seen as an essential part of the creative process and a harbinger of things to come (Dapper Dan made Louis Vuittonwearable 13 years before the brand launched its own prêt–à–porter collection). All design is predictive in some way and what bootlegging indicates is that a product does not fully serve the market. Where would the music industry be without Napster? The iPhone as we know it would not exist were it not for coders “jail-breaking” their devices. What was once illegal becomes legitimised and allows users to unlock a product’s full potential. Day’s creative eye was more than mere “bootlegging” or sampling, however. It was sartorial jazz; a breaking down and reconfiguring of existing codes, reinterpreted in endless variations.

Moreover, calling out cultural appropriation does not kill creative license, it simply holds those in power accountable to cite their sources. The world is vast and information is free, but appropriation without citation by those in power erases the culture being referenced. Why? Because those in power control the narrative and more importantly, the distribution of said goods.

For example, Dutch Wax Cloth, the vibrant, printed fabric we most associate with West Africa is actually a Dutch rip-off of Indonesian batik printing, later appropriated by Africans during the colonial period. Technically speaking, the Africans have appropriated a culture not their own to creatively express themselves. However, although popularised by West Africans, many top fabric brands are still produced in Holland, making those who profit most from the fabrics Dutch, all the while using a bastardised technique that still bears their name. Narrative and distribution.

And yes, Gucci’s all-black Pre-Fall 2017 campaign, beautifully lensed by Glen Luchford (with heavy nods to Malian photographers Seydou Keita and Malick Sidibé) is important; seeing oneself reflected in spaces deemed beautiful cedes just enough permission to see yourself as the same; a level of representation people of colour have been historically denied. However, one has to wonder — akin to the economy of Dutch Wax Prints — who will actually profit from from the use of black bodies in this instance? As “uplifting” as the campaign may be, altruism is a difficult essence to extract from capitalism.

Fashion does not need cultural appropriation. Fashion needs to figure out why it’s bored with itself… It needs to realise that it, too, profits from a colonial mentality, exploiting resources to reinvigorate dead limbs no longer bearing fruit. If the executive team at Gucci was half as diverse as its latest runway show (spoiler alert: it’s not), perhaps these kinds of faux pas wouldn’t happen so frequently.

Darío Calmese is a photographer, visual director and writer based in New York.

The views expressed in Op-Ed pieces are those of the author and do not necessarily reflect the views of The Business of Fashion.